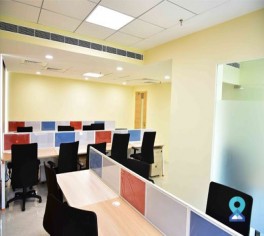 This office space is located in Kondapur one of the IT hub in Hyderabad and is centrally located being at the prime location it is well connected with eating joints, hotels, street markets and malls.

Kondapur is a suburb in Hyderabad which is located in the Rangareddy district and also fall in the Cyberabad Information technology zone and the area has grown into a modern business hub. The area is well connected with central i.e. Jubilee Hills, Banjara Hills and Hitec City and other parts of Hyderabad with the Outer Ring Road and by rail. Coworking spaces in Kondapur are increasing day by day as the area is growing as a technology hub moreover it falls in vicinity with Hitec City which is the financial business district of Hyderabad. The region has also seen a real estate and commercial expansion in few years.

As we talk about the connectivity of Kondapur the area is well connected by road, Metro and rail transport from other parts if the city. The Multi-Modal Transport System of Hyderabad connects the Lingampally station and the Hitec City station which allows commuters to move freely during peak rush hours. The Hyderabad metro is also connection trough Kondapur. The Rajiv Gandhi International Airport at Shamshabad is about 29 Km from Kondapur. The nearest Multi-Modal Transport System available from Hafeezpet and the metro will be from Hitec City. The High demand for commercial spaces and office space in Kondapur, Hyderabad by IT and software companies has encouraged builders to expand. Kondapur also enjoys a good connectivity with major areas in Hitec City and Gachibowli. Kondapur on the other hand is also considered a one of the most popular residential area in Hyderabad as the locality is well planned and offers good social infrastructure and connectivity with rest of the city. Kondapur commercial activities got a boost after the construction of the Hafeezpet flyover which connects Miyapur and Gachibowli which reduces the travel time. After this development there has been a remarkable growth in the region. The area has seen a growth in residential and commercial activities with prominent builders getting into the region, to name few well known builders in Kondapur are Sark Projects, Sreenivasa Pavani Group and SVC ventures. To name few of the localities near by Kondapur include Kukatpally, Kokapet, Hitec City, Miyapur, Madhapur, Gachibowli. Demand for office space in Kondapur has gone up since the area is regarded as a major gateway to Hitech City which is considered as the biggest IT hub of Hyderabad and is only 4 km away from Kondapur.

The Kotal Vijayabhaskara Reddy Botanical Garden or the Hyderabad Botanical Garden is also on of the famous attraction located in Kondapur, Hyderabad. The garden is considered as an eco-tourist destination and attracts a large no of tourists. It was developed by the Forest department of Telangana and is also in proximity of Hitec City and Madhapur. Spar Hypermarket, Platina Hotel and Ambicare clinic are few of the landmarks close to the Hyderabad Botanical Garden. The area is having all kind of facilities like supermarkets, Schools, Hospitals, banks, restaurants, street food and sports facilities, apart from this all major automobile showroom are also available in the area.